Blue Cradle's first project focuses on marine biodiversity in the Banks Peninsula region, specifically on the white-flippered penguin, an endemic species to Canterbury.

NEW: published in September 2021, you can now download and read below our mid-survey report, written in partnership with Pōhatu Penguins and supported by Environment Canterbury Regional Council. 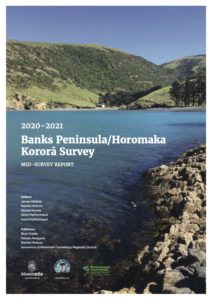 Watch our documentary Kororā on RNZ:

This project, in partnership with Pōhatu Penguins in Akaroa focuses on a Banks Peninsula-wide population assessment Survey, conducted between October 2020 and January 2021.

The White-flippered penguins (Eudyptula minor albosignata) are an endemic species only found in Banks Peninsula and Motunau Island. Although initially thought to be a sub-species of the little blue penguin / kororā, they are in fact a genetically distinct species.

This citizen science project involves local communities across Banks Peninsula and coming from Ōtautahi-Christchurch, with support from non-for-profit and education partners. It brings together volunteers coordinated by Pōhatu penguins, the Department of Conservation with support from the Antarctic Centre.

Blue Cradle produced a documentary in partnership with Kororātahi Creative, co-directing with Kerepeti Paraone from Ngāti Wheke, Rāpaki hāpū in Whakaraupō. This 30-minute documentary is aimed at wide audiences, promoting the conservation of little penguins, and telling the unique story of the Helps family at Pōhatu and the people of Banks Peninsula that are connected to this unique species.

The film was screened during Seaweek in 2021 in Akaroa, Christchurch and across NZ.